OpenShift, TweetStream, and the White Bunny

We're going to dive down into the rabbit hole, and follow up on Wesley Hales great video on deploying the mobile web optimized RichFaces TweetStream application to Red Hat's new, free PaaS offering OpenShift Express complete with JBoss AS 7 under the hood! 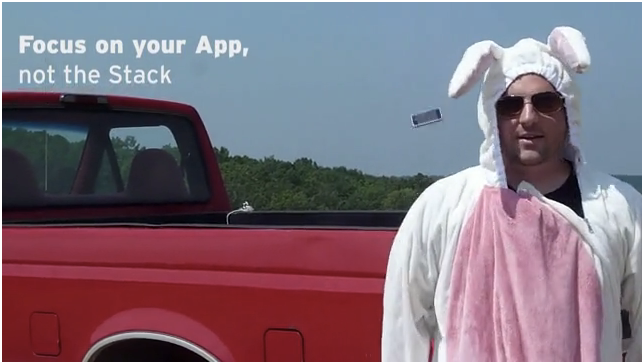 Mobile to Cloud in 4 Minutes

There has already been a lot of coverage on OpenShift, and the mobile web optimized TweetStream app. So I'm not going to cover old ground. Check out these blogs and videos:

The RichFaces team is in the process of migrating our RichFaces Showcase application from Google App Engine to OpenShift Express, we'll have it ready soon. OpenShift offers a number of benefits over GAE, it is a real Java EE container, supports RichFaces push and has a much less restrictive API

Like many other free PaaS offerings OpenShift Express does have a few limitations that you need to consider. The most important ones for our application are limited threads, and JMS support. Note that all of these go away when you move up to OpenShift Flex!

When RichFaces 4.0.0.Final was released our push component was tied to JMS. This provides excellent enterprise level messaging capabilities, but unfortunately requires some setup to use. Since JMS is not provided by Express out of the box we needed to make some changes. So for 4.1.0 we are adding in a few options!

Starting with RichFaces 4.1.0.M1 RichFace Push can be decoupled from JMS. All that is needed is to set a context param:

This will switch push to using an internal message queue. Look for further blogs, and documentation on this in the future. This is also one step closer to our plan to support CDI events as part of RichFaces Push.

Atmosphere updates on the way

Another change that was needed was moving to a snapshot version of Atmosphere. Atmosphere had a bug where it was creating a new thread for each request - ouch! Since OpenShift Express has limited threads available we needed a way around this.

Thankfully this issue was fixed in the Atmosphere 0.8-SNAPSHOT branch. This version of Atmosphere is due to be released in August, and RichFaces will use it by default once it is (likely in the 4.1.0.M2 release).

For now - if you are working on your own RichFaces push application and deploying to Express you'll need to override the Atmosphere version. This is simple enough with Maven, just add the following to your pom:

As was discussed in some of the linked blogs, the TweetStream application uses Infinispan under the covers to provide caching for the tweet data that we process. Infinispan in cluster mode uses jGroups to provide advanced communication support.

The problem here is the threading that accompanies this. For TweetStream it is important to make sure that you are using Infinispan in LOCAL mode. The latest TweetStream source has been updated to use the LOCAL cache.

Where to go from here

Now that we've gone over updates that are needed to take advantage of OpenShift Express I encourage you do give it a shot on your own. The source code is in the TweetStream git repo. Just follow the readme to setup and build it. Then deploy following the instructions in Wesley's video.